It's a bird! It's a plane! It's a drawing canvas that attempts to identify whether the thing you're drawing is a bird or a plane.

I am not too happy with the result of this project because it's basically a much worse version of Google Quick Draw. Initially, I wanted to use ml5 to make a model that would attempt to categorize images according to this meme: 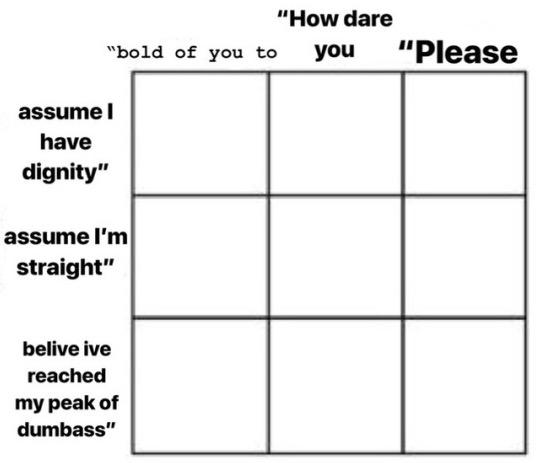 I would host this as a website where users who stumble across my web page would upload images to complete the chart and submit it for the model to learn. However, I ran into quite a few technical difficulties, including but not exclusive to:

My biggest priority for choosing a project idea was mainly finding a concept where the accuracy of the model wouldn't obstruct the effectiveness of its delivery, so something as subjective as this meme was a good choice.  However, I had to pivot to a much simpler idea that could work on the p5.js web editor due to all the problems that came with the webpage-on-Glitch approach. I wanted to continue with this meme format, but again, issues with loading/submitting images made me pivot to using drawings, instead. With the drawing approach, the meme format no longer made sense, hence the transformation of the labels to bird/plane.

I don't have much to say about my Google Quick Draw knockoff besides I'm mildly surprised by how well it works even with the many flaws of my data set.

Some images from the dataset:

An image of using the canvas: