1a. An Example of Effective Complexity

The human brain is biased towards total order: many rules governing brain organization lead to strong similarity between brains. These rules govern how neurons will be constructed, and how they will be linked together in patterns of excitation and inhibition that ultimately give rise to predictable output, e.g. the same(-ish) perception given a constant stimulus. But a brain with too much order could accomplish no more than an 80's-era AI expert system. The formation of unique memories in a newly-formed, 'blank slate' brain (which leads to learning) could be seen as an expression of chaos within the orderly system.

1b. The Problem of Meaning

This problem is particularly conflicting to me because I'm interested in the mistakes that come out of a generative process. I like things that didn't come out as intended, like a GAN-bred puppy with three eyes. In that way I am interested in generation itself, how mutations are introduced, and how society turns against these unfortunate 'failed' instances of an algorithm. But, unlike the 'purity' of the process  Galanter describes, where the artist has no particular goal in mind, I am always obsessing over making exactly what I wanted to make. Ideally, I would want generative art that I make to reach a point between the purely generative sublime and the dirty, ordinary world of meanings and signs.

1a. A field of fireflies on a hazy summer night demonstrates a mesmerizing display of effective complexity. While it may appear random and chaotic to the human eye, fireflies exhibit flash patterns unique to their species to communicate and identify one another. When many occupy a single area, I'd liken the complex beauty to that of a symphony orchestra.

1b. Locality, code and morality: When it's a question of "which part" is the actual art, I believe that the code and method of display are both encompassed in the definition. I'd liken the creation of generative art to that of printmaking; as art that is built with the intention of iteration, the process of making the matrix as well as the copies are part of the final result. It is developed under the constraints of that medium, and thrives under those unique demands.

I saw a really cool video by Veritasium recently about randomness and information theory that I was reminded of by Galanter's article. In it, he talks about the effective complexity of the universe, although he doesn't use that term. After watching the video, I think that the universe is in a pretty good sweet spot between crystal lattice and complete randomness. Maybe because we evolved at this time in the universe, we are well suited for this stage, and that's why I think we're at a pretty good point. But since the universe is trending from the Big Bang (simple) toward total entropy (complex), I think our ability to create effectively complex things might come from how effectively complex the universe is right now.

The Problem of Intent: Why is the artist working with and ceding control to generative systems?

I've thought about this before, and I think randomness is crucial to progress. I think that most original ideas, whether they be inventions or artistic pursuits, come from accidents or random circumstance. Usually we can only work off what we already know, and that usually only can create things we already know. New information, just like Veritasium says in the video above, comes from random chance, because information is randomness at a certain level.

For this reason, I am ceding control to a partially random system. Hopefully this can lead to new insight that I would never have gotten through work that I fully control.

1A. Something I like which exhibits effective complexity would include skyscrapers. Much like crystal lattices, all skyscrapers have an orderly frame of metal bars and walls of concrete to reinforce their static structure, and are in this way have low information complexity. Much like the circulatory or nervous systems of a biological creature, skyscrapers require electrical wiring, air ducts, and plumbing systems to ensure their maintenance. However, the architecture between skyscrapers can be very diverse, so each skyscraper has the potential to look idiosyncratic despite their homogenous structure and necessities. They can range in different shapes, sizes, color, material and style. I would argue skyscrapers fall somewhere between crystal lattices and biological life in terms of their information complexity.

1B. I suppose the issue I anticipate to grapple with the most as I experiment with generative art will be the Problem of Creativity. I believe that, in order to create a program that generates art, I must have an idea of a blueprint, which, when given several variables each of some randomized value, will generate an object mathematically unique but conceptually identical every time. The programmer is responsible for creating the blueprint; the program is responsible for creating different iterations of this blueprint.  The blueprint is the only creative object, not the iterations of the blueprint. My exposure to generative art, unfortunately, has led me to believe that a lot of it (though certainly not all of it) feels, for lack of a better word, soulless, even though all the projects I've been exposed to demanded tremendous effort and thought. For a generative program to feel "creative" to me, it must generate objects which I couldn't have anticipated it creating; where phenomena or patterns arise which I didn't expect; where the program has the capacity to "surprise" the programmer or the viewer. Every randomised variable the programmer includes in the program is still a mark of his own intention; by including this variable, the programmer explicitly expects there to be variations in this variable, and therefore any variation of this variable would only be a consequence of his own creativity first and foremost, rather than that of the computer.

This is a plaster cast of an ant hill. Ants are known to have a complex social system that bestows on each ant a certain simple task. On an individual level, it can be difficult to observe how their actions contribute to the colony's complicated organizing principles (i.e. to make underground tunnels, or to organize themselves into a water repellant lattice). I think the effective complexity of an ant colony lies somewhere between fractals/L-systems and Genetic systems/A-life. 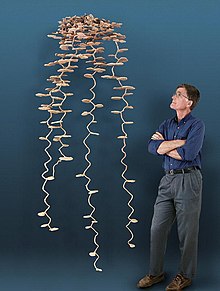 I am currently working on training a neural network on a corpus of Susan Sontag's (a personal literary 'hero' of mine) writing to create a simple tool that aids my understanding of This idea arose not as a postmodern statement against the empire of "The Author" nor did it come from a desire to make a tool that produces a unique textual artifact. I am making this tool to feel 'closer' to Sontag, to somehow tease out answers to questions I have about her thoughts, her writing practice, in the form of generating new "content" from what she left behind. At the same time, I know that what this tool generates encounters the bowls of oatmeal problem. While the text I have been able to generate is different each time, I am not sure why it is so, or what to 'ask' of the tool to make it generate something more specific--basically, the feedback I get from my neural network is limited, so I must rely on my own knowledge of Sontag's work to guide my tool. This is not really an issue for me since I want this tool to be mediated by a human. Anyways, I am still working on some of the issues around generative text and would love to learn more about the discussions

1A. Japanese ceramics could be seen as a great example of effective complexity. Just as other ceramics, basic rules such as what clay to use and what general shape to follow need to be followed to successfully create the ceramics. However, unlike other ceramics, Japanese ceramics shows a much greater tolerance to defects and more appreciation to the unpredictability in the glazing process. It strikes a great balance on the scale between total order and total randomness because it has to conform to certain rules to survive but its beauty actually comes from the unexpected.

1B. The Problem of Meaning has been a long-time struggle for me not only when I am producing generative art but also other digital art. The biggest drive for me to learn coding art is for very practical reason without much meaning, and I only assign meanings to the pieces as work progresses. My works also tend to have a more improvisational nature and I like to find out the final answer through experimentations. In the end I tend to believe that even though I use generative system for a very practical reason, the meaning of the works should be determined by the creator not the tool through which art is created.

Zauberflöte(2018) is Michael Hansmeyer's set design for Mozart's Magic Flute, directed by Romoeo Castellucci. Michael Hansmeyer is a computational architect who seeks generative computation as a creative tool for installations and architecture. His work creates a successful bridge between digital and physical world. The transformation from amazingly rich digital artwork to large-scale physical installations makes the visceral impact on audiences even stronger. The grotto's geometry uses a generative subdivision algorithm that create endless permutations and infinite scales to create lavish details. Along with the perfect symmetry gives the stage more depth and solemnity than normal pillars can achieve and perfectly reflect the nature of Mozart's works. While symmetry gives it order, the infinite amount of details grows like uncontrollable weeds on the installation that gives the piece a sense of disorder and unpredictability.

I feel as though (many) natural things display signs of disorder or randomness while (many) human-designed/built things display signs of order, as we have dictated precisely where and how we want to place something. In this way, I feel as though flower fields or gardens exhibits effective complexity because planted by humans, they have specified growth locations, and are trimmed to the desire of the gardener. Many can be placed in rows or in specific grid structures, which is total order. However, I also feel like many naturally growing foliage have a mind of it's own and after the initial set up (planting the seed), so long as it does not cross a certain boundary, the plants are allowed to grow however they want.

Because most human planted flowers/trees/etc do have designated areas, I think this selection sits a little closer to total order. Due to the way that plants grow, I think there is an inherent degree of disorder (if left unmanaged by humans). Though, this also depends a little on the type of garden:

Somewhat in between -- the flowers/trees aren't allowed to (really pass into the concrete path (though it does, a little), but it also grows with a degree of disorder (leaning towards the path, not being completely straight/perpendicular to the ground).

Much closer to total order; very organized with extremely even paths; in the distance, the colors are very distinguishable from each other. 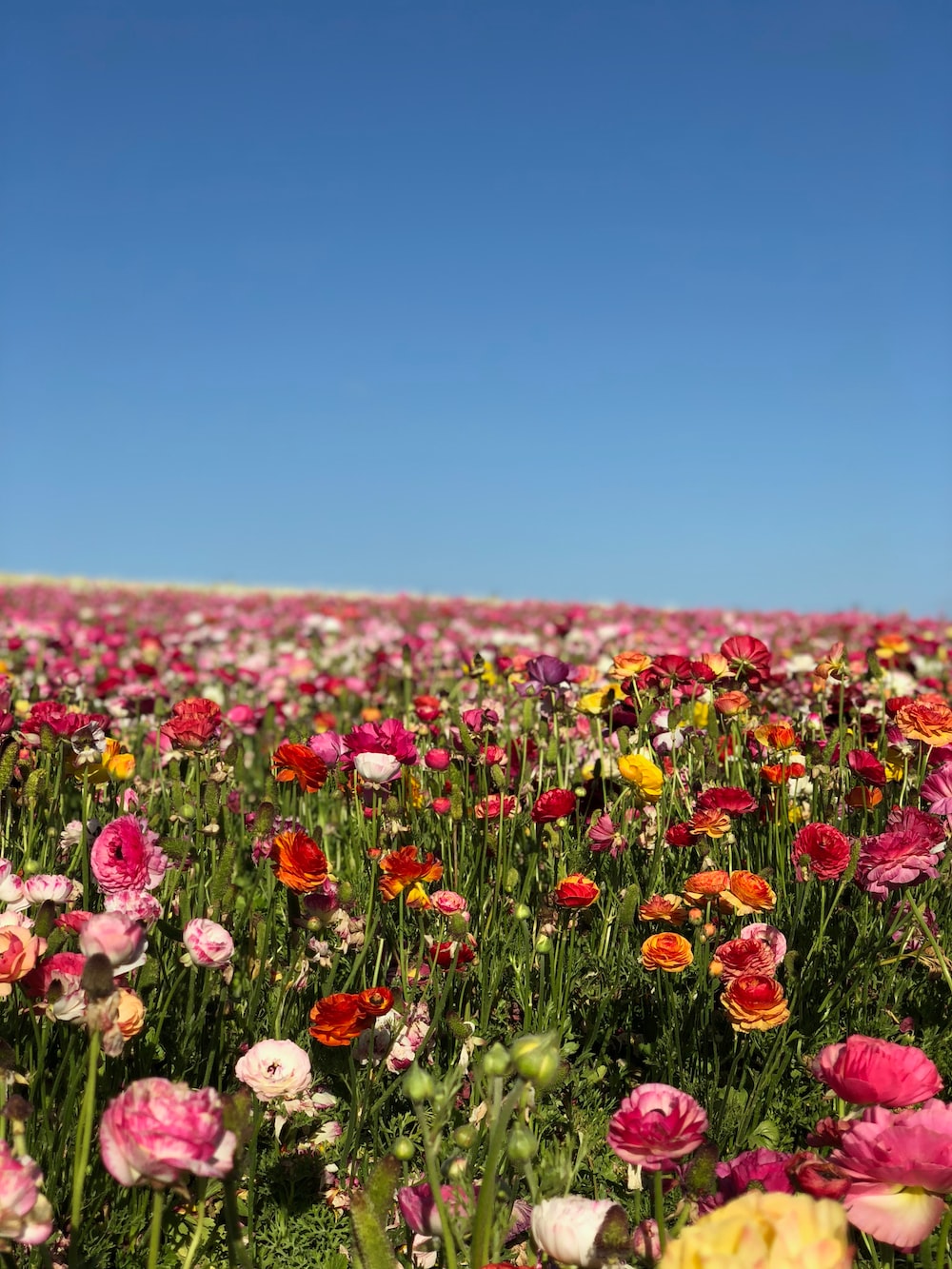 Although they are all the same breed, the colors of the flowers show a degree of randomness and disorder.

The Problem of Dynamics: Must generative art change over time while being exhibited to an audience?

As generative art is "autonomous", I think that the way the art is produced should be able to produce different art each time it is used (so it is not repeating / looping) but because the art must be created, recorded, started/stopped at some point, I do not agree that the art must change over time as it is being exhibited. It is only the point of creation do I think it should be able to change (not necessarily is changing, as this is up to the discretion of the creator, but simply has the ability to change).