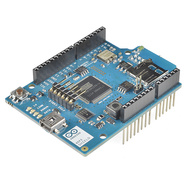 This would definitely be an incredibly convenient addition to an arduino project just because wireless internet means less hassle over ethernet. Then again, I haven’t had much luck with CMU’s wireless… Anywho, this would be really useful for projects involving transmitting/receiving data from RSS Feeds or other sites on the web. Especially if the projects are meant to be portable!
(Too bad it’s a whopping $85…) I’m impressed by the fact that this shield has a pretty high resolution and is also a touch screen. It’s a really useful interactive display and vastly expands what kind of data can be retrieved from the user’s interactions with the arduino. For example, it can measure the speed of tapping, or the position the finger slides to on the screen. Or it can just display some pretty flashy stuff.
(And again, a whopping $59…) After seeing the cap on how large of a program you can put into an Arduino Uno, I’m thinking this shield would be the most reasonable choice for storing large amounts of data for projects that involve plotting or collecting data from a GPS shield or some other database. For example, if I did a project based on surveys from CMU students, I could use the data logging shield and then program the arduino to have some fancy visual output that lets the students see the results of the surveys.
(Less than $20!)

I'm a freshman in the BCSA program at CMU! Twitter: https://twitter.com/ma_michell3 Youtube: http://www.youtube.com/channel/UC1n7reIhFb4XEsHxFIxdl9A OpenProcessing: http://www.openprocessing.org/user/31052 View all posts by michelle