Paper Note – Created by Andrew Spitz and Andrew Nip at the Copenhagen Institut of Interaction Design, Paper Note generates a stack of paper disks that represent a sound wave. I’m enchanted by the creation of physical objects through code, and thought it was a clever way to create appealing mementos. I thought that having to string the disks by hand was super inefficient–I think that a different physical method, such as 3D printing, would be more efficient in terms of rapid production. Andrew Spitz, one of the co-creators of the project, specializes in sound design, so the interest in waveforms makes sense! 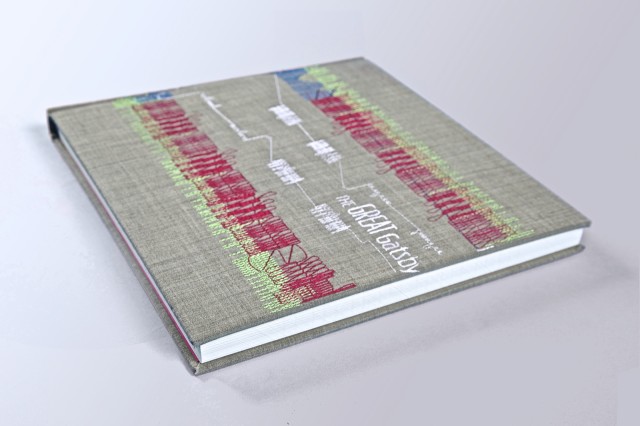 The Generative Gatsby – Vladimir V. Kuchinov, a typography designer who focuses on contextual narrative, created The Generative Gatsby: Jazzed Up Typography, a book whose words are used to represent big band arrangements from the Prohibition-era. The lovely computationally stitched cover originally caught my eye–I was somewhat disappointed that this wasn’t a sewing project! I enjoyed that this used the text itself to provide a context for its generative aspect.

The Feltron Reports – For several years Nicholas  Felton has compiled huge datasets of information about himself into annual reports. The reports are beautifully designed, conveying vast amounts of information with simplicity and strong color choices. They provide a compelling argument for the quantified self movement, in fact, Felton has founded Daytum, a site that allows users to collect and compile large datasets into graphs for public display. While incredibly visually appealing, in some cases I think that some of his design choices (especially light text on light backgrounds) make the understanding of the data more difficult.

maddy (madeleine?) varner is a freshman art student at carnegie mellon university. she gets along with computers well enough. she has a youtube (www.youtube.com/user/madeleinelv) and an openprocessing (http://www.openprocessing.org/user/31193) her twitter is @mlvarner View all posts by madeleine