For this post, I'll be discussing Daniel Brown's Dantilon: The Brutal Deluxe (2016.) The title might refer to the Brutalist architectural style of the rendered fractalline buildings. Though I don't know anything about architecture, I am interested in dream landscapes both neurobiological and artificially generated. In the waking brain, hippocampal place cells fire in response to a specific known location and orientation. More mysteriously, they also fire during sleep, when the body itself is still, but new and old memories flit through the hippocampus on their way to longer term storage. That specific place cells exist calls into question the sense one typically has of knowing unquestionably where one is located. To me, computer-generated landscapes take on the sense of dreamlikeness when they inspire a sense of familiarity, like a dredged-up memory, while simultaneously inducing discomfort and displacement.

The imagery here appears to have been created with a three-dimensional fractal (probably a recursive function drawing any of a selection of features at a given level, from the blocky planes that make up the 'walls' of the buildings down to their individual window detailing.) The work has a fairly high effective complexity, as every instance (at least that the artist included in the album) is perceptually unique. It does, however, skew more towards order than chaos. The rules of the generator are strict enough that all the architecture seems physically possible and remains photorealistic, albeit somewhat gravity-defying.

Happy Place is a Processing piece formed by placing nodes along the perimeter of a circle and instructing them to move towards "friends" and away from non-friends. I can see from the source code linked in the web page that it is a fairly simple program wherein at each frame, each node moves then adjusts its position to find a "happy place" between moving towards friends and away from non-friends. All functions and objects are named accordingly, with nodes being called "Friends" and their movement adjustment function called "findHappyPlace".

Happy Place calls out to me because it evokes memories of working physically with charcoal despite being computer generated. It looks like a drawing formed by shaking a piece of paper with charcoal dust on it, which may very well be a physical analogue to this work. Happy Place is a textbook example of effectively complex because it demonstrates chaos created by a combination of randomization and simple rules. The "initial condition" is determined by random placements, but the resulting movement is dictated by clear rules. As Galanter suggests, this leads to chaotic dynamics even though the systems themselves are deterministic, and we see evidence of the butterfly effect and sensitivity to initial conditions in the images that Tarbell displays. Tarbell himself includes varying simulation results, such as when the group of friends migrate away from the circle entirely, or when two friend groups repel each other to opposite sides of the canvas.

Drawing Water is an art piece which uses water usage and accumulation data to create a piece illustrating the disparities between where water is collected and where it is actually used. What I admire about the project is that it is almost a passive-aggressive political swipe to reveal hidden truths of the environmental sector, because it shows that the creator is willing to speak out against the government through his art and is not afraid of what repercussions that may cause. I believe the algorithm used charted out where water was collected versus where it was used, and plotted it on a specialized graph with different shades of blue meaning either different collection methods or different types of water. The piece shows that the author does not use very complicated algorithms to accomplish his work, but uses them in a creative way to make it easy to read and understand. The work's effective complexity is in its data collection, and the artist has balanced order and disorder by presenting that data in an aesthetic yet revealing way to expose the hidden truth. At first glance, the numerous water paths on the artwork seem over the top and convoluted, but after some time it becomes easier to see which areas of the country use more water compared to which areas produce the most water.

This project proceduraly generates 3D-models of stylistic, fully-rendered buildings which are all thematically, tonally consistent but structurally unique. The produced objects look as if they could be used as assets for a video game, and their implementation could greatly reduce the amount of time which goes into creating immersive, unique gaming environments. I admire how well-rendered each of the iterations are, and how each of them look intentionally structured, as if made by a human. Each building is visually unique while stylistically homogenous, giving it a medium-low information complexity and a medium effective complexity.  I know that the algorithm was made in Houdini, a 3D animation software which emphasizes procedural generation. The procedure which Opara utilises includes four primary steps: (1) creating the sillhouette of the building, or blocking out its overall shape; (2) adding common elements such as doors, windows, chimneys, staircases, etc. (3) carving in wood patterns into the faces of the buildings, and (4) texturing, coloring, and shading, as well as slightly warping the house to appear crooked. Opara implements many restrictions, but allows for variety through the use of randomised variables which determine which elements will be included and in what fashion. I am impressed by this project's potential to save game developers a lot of time and money, while maintaining the same integrity of quality, and I am intrigued by how Opara's procedure reflects the process of building a house.

On her website, Opara provided an interesting quote which concerns how software is capable of subverting its creator's expectations, and therefore appearing to have original ideas of its own: "One of the most satisfying part was, when generating the final lake houses, the network would give me unexpected, but very creative results that I simply didn't anticipate or take into account when writing the rules. And those outcomes still had all the rights to exist and, in fact, looked extremely curious. If that was a person, who built the house, I would praise him for originality! Does it mean that the systems can be creative within the constraints that we give them? I like to think of Houdini as a student, and you are a teacher, who can put any information in a student's head and it will be perceived with 100% accuracy (for the worse or the better). And, as many teachers know, students have a tendency to really surprise you with the things they come up with."

Link to the  Project: https://www.anastasiaopara.com/lakevillage

Zauberflöte(2018) is Michael Hansmeyer's set design for Mozart's Magic Flute, directed by Romoeo Castellucci. Michael Hansmeyer is a computational architect who seeks generative computation as a creative tool for installations and architecture. His work creates a successful bridge between digital and physical world. The transformation from amazingly rich digital artwork to large-scale physical installations makes the visceral impact on audiences even stronger. The grotto's geometry uses a generative subdivision algorithm that create endless permutations and infinite scales to create lavish details. Along with the perfect symmetry gives the stage more depth and solemnity than normal pillars can achieve and perfectly reflect the nature of Mozart's works. While symmetry gives it order, the infinite amount of details grows like uncontrollable weeds on the installation that gives the piece a sense of disorder and unpredictability.

Zero One is a code-based generative video programmed by Raven Kwok and sound by Mike Gao. It was programmed and generated with Processing with minor edits in Premiere during composition. It consists of multiple interlinked generative systems, each of which has its customized features, but collectively share the core concept of an evolving elementary cellular automaton.

I really admire that within any still shot, even within repetitive patterns, each design/part looks different or unique from each other. It gives the entire video a more organic/natural feel to it, instead of being super cookie-cutter. 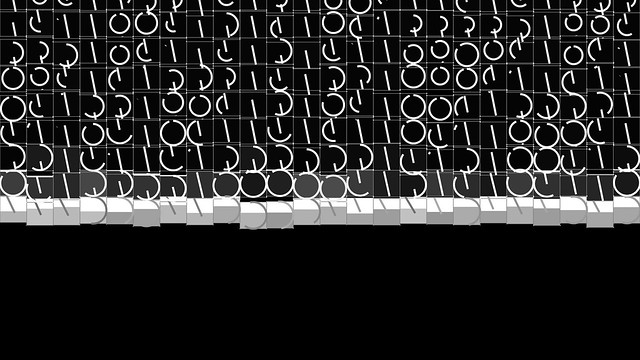 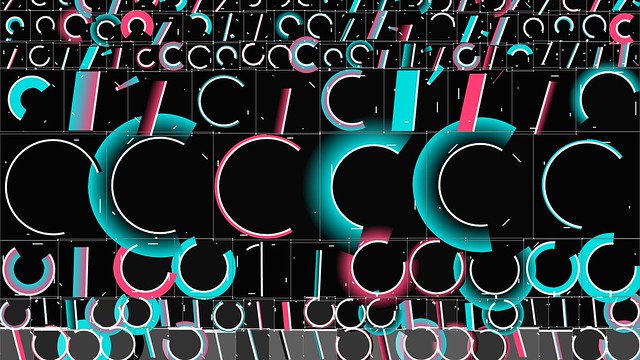 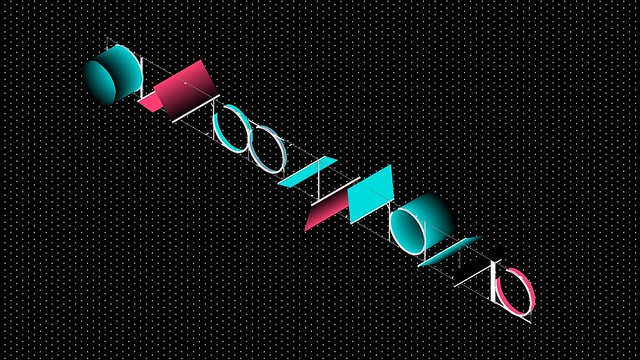 The project consists of multiple interlinked generative systems, each of which has its customized features, but collectively share the core concept of an evolving elementary cellular automaton.

The colors, shapes, and the motion graphics I feel are the areas in which the artist has taken control of and used their artistic sensibilities to adjust the project towards what they want appealing and attractive.

The order in this project is the similarity in shapes; the repetitive usage of circles and lines through out the entire video, and similar actions within a scene (e.g. the slant of all the images, or everything moving downwards). The disorder in the video are the specifically different forms each shape takes (size, color, each pixel movement). Each circle is sized a little differently, and the placing of, say a line through the circle, varies each time. This is the disorder of the artwork, but because it is placed in an orderly fashion / balanced order, it achieves effective complexity.

In this project Everest made two zines (printed and digitized) using an "intensive upscaling algorithm" that reinscribed details in highly compressed thumbnails. Essentially, this project employs a powerful neural network (if I understood it correctly) to add more detail to an image whose format was intentionally designed to be a reduced (but visually effective) version of the original image. I'm interested in how this work touches on Hito Steyerl's discussion of the politics of 'poor images'. Steyerl argues in Defense of the Poor Image that there is a hierarchy of images based on their resolution, and that resolution has been "fetishized as if its lack amounted to the castration of the author."

We could simplify, then, and say that the upscaling algorithm is part of the redemptive 'agenda' of the empire of resolution. Yet, Everest's project complicates that assumption by showing us the limits of such algorithms. While we know that the 'poor images' in the zine have gone through a rigorous process of enrichment, they aren't particularly remarkable--they still fail as (en)riched images. Yet, what we are given in the zine is a kind of unheroic visual document of these two systems trying to compromise their difference--and we are asked to pay attention to that. In this project we already see tension between disorder (the reality of compressed, low res images) and order (the desire for high res, rich images). But with regards to how order and disorder function in this work effective complexity, I see this work hovering around simple-disordered.