For my plotter my goal was to make a Mandala generator. As a disclaimer, I am not Buddhist or Hindu, however I’ve been intrigued with and reading about Mandalas for a couple years now and I am very interested with their form. Every Mandala has a sort of uniqueness about it but they tend toward the same geometrical shapes, composition (symmetry) and patterns. Thus I wanted to explore the idea of computationally generating a highly spirtual yet mass-producible symbol. 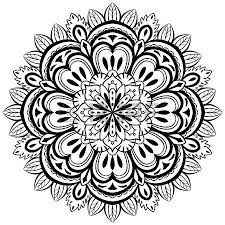 I started by choosing shapes and patterns I see very often in Mandalas. These same shapes tend to occur often in Henna designs as well, some more complex than others. I settled on a few of the simpler ones to code: circles (of course), polygons, lotus petals (the teardrop curve),  the bumpy moon cake shaped flower (most prevalent on the third image pictured above), and the dollop shaped curve(most prevalent in the middle image). Mandalas are also highly symmetrical, therefore unit circles came back from high school trigonometry to haunt me. This also constrained the time I had to express more of the complexities of the Mandala I initially wanted, such as complex geometry, shading and patterns.

Although the computer generated images took some time, the laser cutter took about 14 minutes each to produce these. My lesson existed more in the realm of the difficulty of producing random patterns but with a goal aesthetic, rather than the time it takes to cut them in real life. I guess you could say I’ve achieved a greater appreciation for the art of designing Mandalas as well as Henna– its not as easy as I thought to compute their visual motifs.