For my final project I decided to do something similar to Patatap. It is interesting to debate whether or not this can be classified as an instrument, as it makes music and has a player. The duo that made this piece are audiovisual artists and also in one of my favorite bands called Lullatones. I think they were spot on with the graphics correlating to each sound, allowing for another kind of way to experience music. This is a clip of me demoing Patatap:

Another interesting piece I found is called Keylight. It uses 3d space as a visualization for sound. Different tones are played based on where they are placed, and they ping back and forth from eachother. Both these pieces are interesting audiovisual pieces. Patatap is great because the forms correlate so well with each sound.

For my project, I wanted to do something based on social media and responding to how people interact on the internet. That combined with an interesting interactive component as well as aesthetically pleasing representation is what my final project proposal is about. In thinking about this project, I’ve come across a lot of interesting projects that has inspired the beginnings of this project.

I like Nicolas Felton and Moritz Stefaner’s style of representation; I also like the iterative game component of the game Dig n’ Rig, but the two projects I want to focus on are The Museum of Feelings Exhibit, and Spam Architecture, Alex Dragulescu. Both projects portray a significant part of online, digital life in a creative and interesting way.

The Museum of Feelings is an exhibit that changes and reacts to the emotions of the people who visit it. The emotions are determined by people taking selfies and overlaying color using a ‘MoodLens’. The museum then takes in all of these emotions and displays them back, to be seen by people visiting. 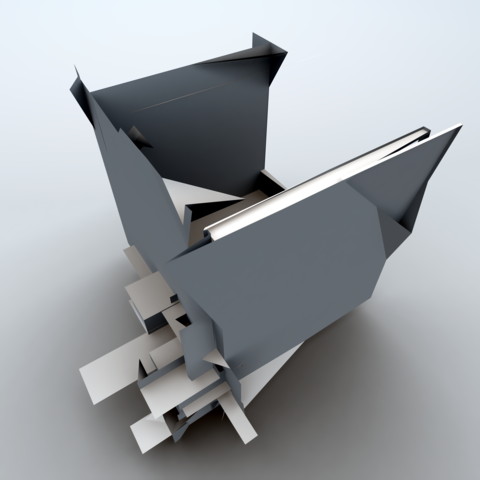 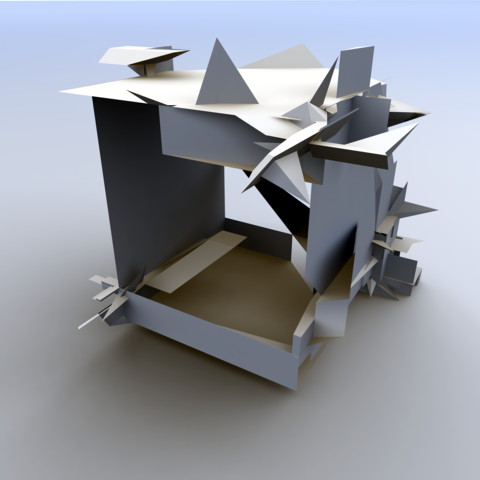 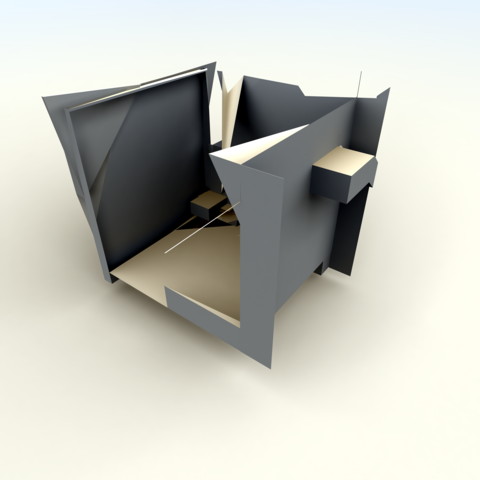 I looked for some weird internet data creature material for this looking outwards and found a lot of interesting work. Logistically I would share this basic project by Rob Dubbin, found here: https://twitter.com/oliviataters. A twitter bot that approximates a teenage girl, more and less convincingly depending on when you catch her.

More excitingly, I also found Mirthe Berentsen’s Ouranophobia or the right to be forgotten super relevant/cool – a short surreal fiction piece about a ghost of the protagonist’s mother made from her internet data trail. Find it here: http://aksioma.org/pdf/aksioma_PostScriptUM_21_ENG_Bridle.pdf

I think tonally that is something I am more interested in – a kind of earnest pulling-apart of a sort of absurd dissonance that lies very close to ‘real life’. But I want random sentence generation/ word association stuff to happen too.

One project that I found interesting and relevant was ‘Computer Music Studies’ by _blank and Mikel R. Nieto. The same set of data or code is used to generate both the audio and visual outputs of the final product. I find it interesting that they managed to link audio and visual in such a technical manner.

Another project that I was looking at was Subliminal Glitch by Amnon Owed. Using Processing functions like get(), set(), filter(), blend(), tint() and bitshifting, as well as objects, he created an animation where colored particles collide and create a glitching effect. I like how the glitches are not formed randomly but based on some other underlying code.

This project was interesting how it linked all the glasses or what-so-ever that gets placed on the bar table so that it can provide connections between who are drinking at the bar. This is where I came up with the idea of linking points across the world to provide a sense of connection among what goes around in the world. So many people these days are caught up in what they are facing that they often lose a sense of what goes around them. I think this project helped me come up with an idea that works in the same why but in a larger scale.

This project gave me more opportunities in what I can do with the race distribution circles I have from the first phase. It can disperse and create a new data output that is relative to which part of the world these circles came from. One possible data output could be annual/daily death at certain parts of the world and translate it into a graph using the circles like this project does.

I really like Matt Pearson’s video submission (I believe that’s what it is?) for the Perth Arts Festival. I like how it grew on itself, moving and flowing consistently like a river or how I imagine the northern lights to flow. I also find the colors and forms beautiful that are created and idealy I want the final result of using my final project to be similar to a still of his video. I feel like this would have been even cooler if it was connected to motion or some action of the viewers, something similar to text rain but based off the motions of someone’s finger or head.

If you’d like to see Matt Pearson’s work (my personal favorite are his videos, they work very well building off the music) please check out Zen Bullets (wouldn’t that be an awesome name for a gallery space?).

The second project I found interesting was made by YesYesNo aka Zach Lieberman, Emily Gobeille, and Theo Watson. Foir the launch of the Nike Free Run+ 2 City Pack series, they created a software that would allow runners to create dynamic paintings with their feet using their Nike+ GPS run data. Tyey invited the participants to record their runs and taking the metrics from their runs, creating visuals based on the speed, consistency and unique style of each person’s run.

Using the software the participants were able to play with the mapping and adjust the composition of their run which was then outputted as a high resolution print for them to take home. They also worked with the Innovation Lab at Nike to laser etch the runner’s name, the distance they ran and their run path onto a custom fabricated shoe box, which contained a pair of the ‘City Pack’ shoes from their city of origin.

If you’d like to see more images from this project, just click here or thesystemis for more work by Zach Lieberman and Collaborators.

I liked how the first project was motion based in that everything is constantly moving while the second takes something that was moving and creates art based off of the patterns and data already collected. I think they both definitely give me ideas on what we can do for our project if not a stepping stone of ideas we want to make into a reality.

Having gone through some of the work of generative design artists, the one that truely inspires me is Memo Akten’s project titled “Waves“.  He simulates ocean waves using hundreds of thousands of particles.  The resulting forms of his work are amazingly beautiful and he describes this part of his work as “Aesthetic Explorations”.  This project is an ongoing study, and he has used various particle systems for the study of ocean wave behaviour, including one that looks like paper and another that looks like thermopore flakes!

AlteredQualia’s project Multi-Touch toy is a remarkably creative and charming amalgam of systems.  A menu let’s you choose from eighteen delightfully different systems which react differently to the mouse movement or mouse click.  Each of the eighteen systems generate their own forms and colours.

Of the two projects, the waves would be my most favorite owing to the sheer beauty of it.  I could possibly stare at these images for hours on end, and be totally absorbed by how the waves evolve.  However, the Multitouch toy would be my favourite as an amusing and enchanting time pass!  While the waves is a serious piece and I would classify it as a masterpiece, the multitouch toy is just that..  a toy!

For my final project, I was inspired by several of the artists that created forms of information visualization. A few that I looked at in particular were Aaron Koblin, Nicholas Feltron, Chris Harrison, and Amanda Cox. I am fascinated in their use of images and sometimes interactive elements to represent complex information or statistical data on a large scale. I especially like some of Koblin’s projects such as the ‘Bicycle Built For 2,000’ which compiles over 2,000 human voices recorded through the internet to create a song, and the ‘eCloud Project’ which is an installation made from tiles that fade between transparent and opaque states to reflect the weather from around the world. I also like Feltron’s projects, which use graphics to portray reports of yearly information.

I am inspired by their use of engaging visual elements and interactive features that allow for easy understanding of statistical information. I hope to incorporate similar elements into my own work for my final project.

Once I decided to do data visualization for the project, I found a variety of artists and programmers that I could draw inspiration from. I was particularly interested first by David Wick’s project, Drawing Water. Wicks has a background in design media arts and architecture, but works now primarily as an artist using computers. Drawing Water shows the flow of water around the United States in a way that is both clear and visually compelling. The lines vary based on daily rainfall, while color changes based on the water consumers in that area.

Another project that I was intrigued by was Chris Harrington’s InternetMap Visualization.He uses information to display the global connection of internet around the world and the density of internet usage, and the result is an interesting web of fine lines that, when overlapped enough, indicate the originating nodes and the denser areas of network. Chris Harrington is currently an assistant processor of Human-Computer Interactions at Carnegie Mello, and works often with wearable interfaces and interactive technology.

While formulating an idea for my final project, I looked up a lot of work that used generative and/or audio-reactive visuals. One of the first people I came across after looking through some of the links on the course website was Tina Frank. I loved her piece Vertical Cinema, colterrain (2013) but realized I mostly admired it because of the way it was exhibited–in a gorgeous cathedral on a tall thin screen.

I started looking instead for web-based work and came across the Echo Nest Remix API, which hosts a bunch of projects that use Javascript and Python for audio-visual mashups. Below are a couple of the projects I liked and thought I could feasibly replicate aspects of for my final project.

Check out a browser app version of this project here.

I like these projects because they use jarring cuts to create a sense of freneticism and sensory overload. I’d like my final project to have a similar kind of intensity.