“See Something or Say Something” is a project created by Eric Fischer in 2011 which details the usage of Twitter and Flickr both by number of people and by location.  The Flickr data is shown in orange, the Twitter data is shown in blue, and places where both applications are used are shown in white.  This data was compiled and then programmed to show a map of the world as it exists through the usage of these applications.  The software that creates the these maps runs through the photos/tweets in the order in which they were posted, plotting the earliest ones brightly and progressively declining the brightness for points that come chronologically later.

This project highlights Eric Fischer’s interest in both representing human data and his fascination with trends in human technology use.  I particularly admire this project because of its role in representing human data and directly addressing the audience through its choice of subject matter.  Eric Fischer’s ability to do this while simultaneously creating a piece of art that is visually pleasing is itself tremendously impressive.  But even more than just that, this project raises some fascinating questions as to why people choose to interact with particular technologies the way they do, and makes you wonder how the environment changes these choices. 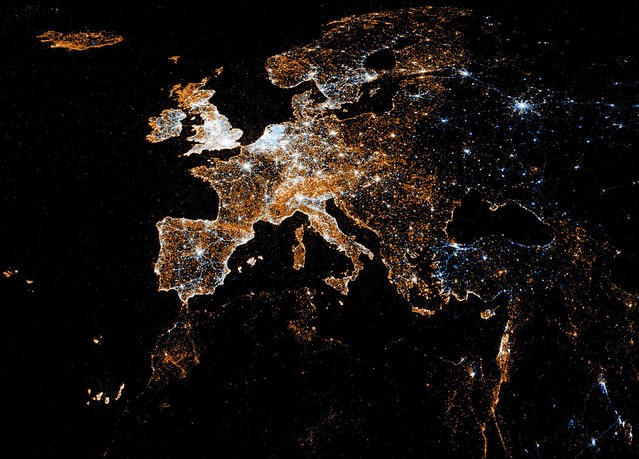 This project in particular was a challenge for me because when I set out to create my curve, which was a Spirograph, I wasn’t sure how to implement the equations I was given. This project really pushed me, as it required a great deal of outside research to implement the effects I wanted. The map() and scale() functions, which I had never used before, quickly became my best friends. It took a considerable amount of trial and error (approximately 3 separate versions of the same program) before I managed to get the response I wanted. A relatively minor element that I am actually quite proud of is the echo effect caused by moving the Spirograph. I managed to accomplish this by making a black, but semi-opaque, rectangle which redrew with each iteration and covered the previous versions of the Spirograph partially at first but progressively more as it redrew, until the canvas became solid black again. Ultimately, this project really forced me to utilize the online resources provided to me in a way that I haven’t had to do before, and I think this change resulted in a much cooler final product than I would have been able to produce otherwise.

This piece by Robert Henke, Fragile Territories, was imagined in 2012 and formally introduced through exhibition in early 2014. By using lasers who sync their movements with vibrations and frequency changes in ambient sound, Robert Henke creates an atmospheric distortion that manipulates the eyes and ears of its viewers. I admire this piece both for its beautiful composition and also for its innovative way of synchronizing sound and lasers in a visually unique manner, as the manipulation of ambient sound and light generation and pattern forming is relatively unheard of. This emphasizes both the complexity of the code necessary for this level of a project, and also underscores the artists own inclinations towards atmospheric artwork. He highlights his desire to manipulate the space around him, both through sound and through sight, and in this unorthodox manner connect more immediately with his audience.

I set my abstract clock to be a representation of the inner planets in our solar system and their movement around the sun. While some planets may at first seem stationary, all of them move at varying speeds (some just very, very slowly). Each planets rotation represents a different facet of time, while also representing their respective different movement speeds in relation to their distance from the sun. Mercury depicts seconds, Venus depicts minutes, Earth depicts hours, and Mars shows how many days have happened over the course of the current month. This was one of my more involved projects as it required a fair bit of trial and error. Most of my struggles came from implementing the math necessary to allow for constant movement that simultaneously highlighted the necessary time values. All in all it was a really interesting experiment, as it resulted in consistent changes in my plan, and required a great deal of adaptation to actually capture my intended design.

With this particular project, I knew that I wanted to repeat a common element to create visual stimulation.  I ultimately decided on emphasizing ellipses, as overlaps in lines created really interesting visual crossings that developed into a really cool distorting effect throughout the work.  This was also a great project for stretching my nested loop skills, and was really fun to explore and run wild with!  I really enjoyed manipulating color to develop interesting color movement, and overall this project allowed me to practice and better understand the layers of coding and how they cooperate.

Marc Fornes uses coding to create a variety of computer generated sculpture work that he displays around the world, this particular piece,Pleated Inflation, functions as an informal amphitheater that people can play and interact with.  It formally opened to the public on September 11, 2015.  Marc’s code heavily utilizes repetition with minor variations for interesting visual randomization, and the work itself, both in size and in function, highlights Marc’s own desire to create art with both aesthetic beauty and interactive function. http://theverymany.com/

This project, Flight Patterns by Aaron Koblin, was created in 2009 and is a piece of generative art that shows the flight patterns of airplanes over the United states in a single day. I admire this project both because of its striking visual style, and also because it incorporates information about people in a unique way, which I think is both a fascinating way to draw in an audience and a creative approach to looking at human travel. I suppose the algorithm that produced this work required a great deal of outside research to construct, as without records of flight patterns, it would be impossible to configure accurately. Ultimately, this work emphasizes Aaron Koblin’s fascination with human beings, their movements, and their routines, and his appreciation for visually active artwork that draws the attention of the observer through movement and variety.

This assignment was a real challenge for me, because going into it I struggled with manipulating variables. I did a lot of tinkering with smaller variables trying to capture different expressions with the mouth, and while I think my project turned out well, I didn’t accomplish everything I had hoped I might. I have learned from this assignment though, and I am excited to see how I can implement my new understanding in future assignments!

The game Depression Quest is a game developed by Zoe Quinn and posted publicly so that she could attempt to express what it was like for her to live with depression and give anyone who played the game a better understanding of how people with depression suffer.  What I find completely inspirational about this work, besides the fact that Zoe did a large portion of the work for the game by herself and for no profit whatsoever, is that it is a radically new approach to making video games as it doesn’t rely upon violence or spectacle to drive the narrative.  Instead the player simply reads words on the screen and comes to react and draw emotional investment out of the actions that occur and the consequences of their decisions through prompts on the screen.  The game ‘s dialogue was natural and expressive, and found interesting ways to capture and re-frame a feeling or experience.  This made the game more encompassing and made each choice feel like it both drove your towards an end goal and also was a natural selection for you to make.  The game brought about a great deal of controversy from people who saw it as being based around a nonexistent issue, and also, as the result of some nasty rumors, brought about a wave of criticism towards how games and game publicity are received by the media.  But despite all of this, Zoe Quinn’s game, which drew inspiration from blog posts that she read all over the internet about people who struggled with depression and from books and literary works which also covered the topic, helped to better explain and underscore the struggles of depression through a beautiful and emotional artistic project.

I wanted to try and use a lot of singular ellipses to give the structure of my face, and then settled on a blue-ish pallet for the coloring of my skin. I ended up adding the browns and the yellows because I thought it might be a nice contrast to the repetition of the blue, and I set in to use rectangles for different elements of the face to add variety.  It doesn’t look all that much like me, but it was really fun to experiment with!