This is an animation based on the K-T extinction. It depicts a dinosaur called a Conchoraptor, running through the desert looking for food or water. Clouds are raining down molten glass and there are dead Tyrannosaurs laying everywhere. I wanted to emulate a scene from the movie Fantasia where dinosaurs lurch aimlessly towards death. For the landscape, I made a really neat effect by using angled triangles. It’s pretty busy in terms of objects so the frame rate is probably terrible.

Richard Davey used a library called three.js to create imaginative 3-d generative landscapes. The pieces were posted on a great resource called creativejs.com, where anyone can post artwork they’ve made using JavaScript. He also runs a website called PhotonStorm.com where he makes games and pixelart. I can’t embed them here but I can provide a link. The work uses simple but effective lines and glow effects to create a sensation of being inside a computer world like Tron.

Another source of inspiration for me is the secret Chrome mini-game T-Rex Runner. When the browser can’t connect to the internet a dinosaur icon appears. When you hit space, he starts running. The simple pixel art makes it light and fun to distract from the crippling boredom of no internet. I like the simple gameplay and quick restarts that keep you from getting upset when you fail. It is unknown who designed this game, but it was someone at Google. The code is so simple it fits right into the Chrome source. You can see all the code here.

My project will be a generative side-scrolling game starring a dinosaur during the K-T extinction event. The dinosaur is a Conchoraptor named Katy (pun) who is struggling to survive in the harsh landscape after the impact of a massive asteroid. 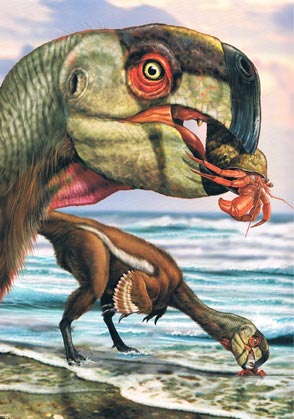 The blast would have instantaneously killed half the life on earth and then sent out radiation and a massive cloud of debris to block out the sun. For weeks afterward, intermittent storms of glass and molten rock would rain down. Food would become scarce and creatures would be forced to wander out of their normal habitats in search of it. The end result would be an interactive version of the scene from Disney’s Fantasia where the dinosaurs lurch aimlessly towards the horizon.

My version, would feel a bit more hopeful however, as Katy will be carrying her egg, a symbol of progress and evolution. As Jeff Goldblum would say, life finds a way. You wouldn’t directly control Katy, but use objects like leaves to shield her from harm and to guide her over tricky crevices. I also want to use parallax and lighting effects to give everything a sense of scale. This is the end of the world after all.

I was inspired by the way soap suds cluster together and branch off to create a creature whose greatest strength is its family. These bubble fish have no fins so they can only swim in one direction. However, they can give birth to more fish once they turn two and the force of each one swimming helps it determine what direction to go. Each fish is connected with a spring and swims faster when the mouse is close to its angle. Each child fish can also have children. The children are stored in a children array within the parent object, allowing you to create springs from parent to child without passing in objects. The more fish there are, the better the family can catch the mouse. Fish give birth when they land on the mouse.

Speaking of interactive artists who just happen to be women reminds me of some events last year we don’t really like to talk about. The #GamerGate movement targeted women in the gaming industry and sent death threats . The most prominent victim of harassment was indie game developer Zoe Quinn. 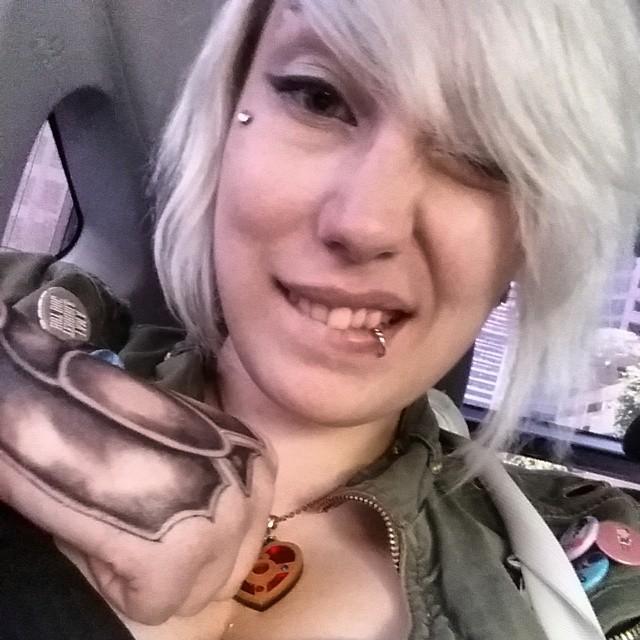 What makes this especially tragic is the truly innovative interactive story she was telling. Depression Quest depicts the chilling reality of living with depression in the modern age. It puts you in a position where you are often aware of the choices you must make in order to escape your depression and yet find yourself unable to make them. This is accomplished by subverting the tropes of most choose-your-own-adventures and blocking off one or two of the choices.

You are forced to sympathize with the situation most depressed people find themselves in. The scene is also set with the TV static motif, the use of photographs as if you cannot directly see anything you’re doing, and the eerie use of sound.

It’s a sad state of affairs when a woman in the industry can make a powerful work like this and be bullied and threatened as a result. Real change is needed for the inclusion of women in interactive media and computer science.

You can play Depression Quest for free here or donate money, some of which goes to the National Suicide Prevention Hotline.

I wanted to play with recursion, which we haven’t spent much time on in class, in conjunction with the continuous nature of the turtle graphics. I used a dodecagram (12-pointed star) and made the function call itself while decreasing the size of the star. I also wanted to challenge myself to make something complex visually with as simple code as possible. You can click to make the lines thicker and scroll over the shape to light it up.

William Dively found a really fascinating Kickstarter page that designed a platform for music using 3-d printed totems, Augmented Reality, and digital music to create a synesthetic experience for your music. It works by creating a code, like you might see used by shazam to digitally track music, but then it converts this code to a visual and then to a 3-dimensial, printable form. Then you can own a physical music totem. Then with the app, you can view the totem through a screen and it will animate the object with effects related to the song.

The effect is that the user feels like he or she is holding a piece of solidified music that comes to life when viewed through a looking glass. A really inspiring piece of art when music has become so ethereal and digitized that it almost no longer exists.

This is a picture of my friend Emmett raking leaves. He is having a good time.

I started out just playing around with drawing circles to represent pixels. When I made them overlap with an offset they looked like the picture above. Then, after spacing them out more evenly, I had the idea to make them into objects. Having the pixels be objects opened up a lot of possibilities. I could have them move around and change size based on different variables. If I had more time, maybe I could have given them all unique behaviors based on their color and have them all interact. Instead, I settled on making them flip dynamically when you click. See below.

At some point, I had the idea to replace the circles with colored pictures of leaves. First I had trouble making the color squares transparent so you could see the leaf shape.

Then I decided that circles might still look better. I think it does, but making the image and the color different shapes and sizes made some nasty bugs.

Finally I settled on the design you see below. It looks kind of disturbing to me, and it’s bizarre that a man made of leaves would be raking up dead ones. Oh, and I made all the green ones pulsate like they’re alive.
portrait

In honor of the new Star Wars film, I decided to recreate the classic scene from A New Hope where Luke flies through the Death Star trenches to blow it up. I used a noise function to generate the terrain and made numerous arrays of objects with different behaviors. You control Luke’s X-Wing with the mouse and click to fire. Avoid the sides of the trenches and the enemy TIE fighters. If you shoot a tie fighter it will blow up. There’s no ends or game overs. It’s basically just a little demo of object-oriented programming.

Edit: It is working perfectly on my computer. I don’t understand why it’s not embedding.