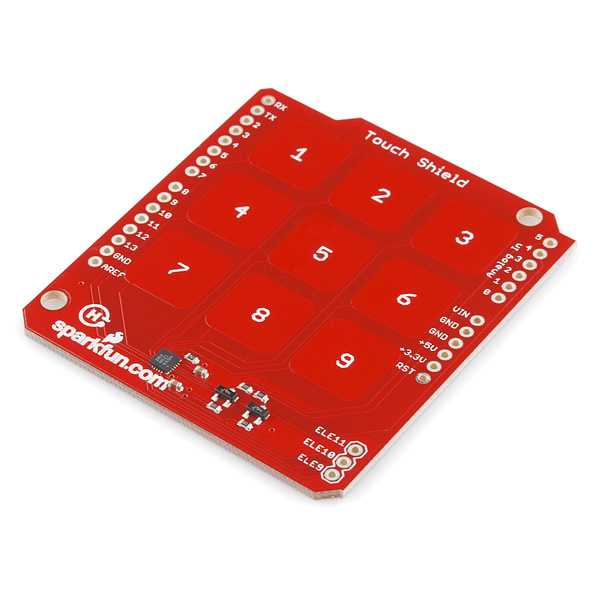 I wonder – why one would use a shield as opposed to nine individual capacitive touch sensors? The Arduino documentation has a simple answer: shields “are easy to mount, and cheap to produce.” Also, if you build a custom shield for a project, you can recycle that functionality later in another project. The improved Adafruit Motor Shield accommodates 2 stepper motors, 4 bi-directional DC motors, and 2 5V servos. It features a stackable design, allowing for up to 32 motor shields stacked atop each other, so one could conceivably control 64 stepper motors or 128 DC motors in a single project. There is also a small prototyping area on the board for wires or other components.

I had to look up the difference between a motor and a servo. A motor is either on or off, but its speed can be controlled via PWM (pulse width modulation). A servo, on the other hand, moves to an output position specified by a control signal. So it has a 3 wire connection: for power, ground and control.

I wonder how difficult it would be to make an automatic centipede from stacked motor shields and DC motors.

The Protoshield is a prototyping shield. Attach it directly to a breadboard for increased working space, shown below:

With a protoshield I can work on a bus, plane or volcano. Besides, it’s pretty cumbersome to lug around a prototyping plate.

When the prototyping phase is over, solder directly to the board. The stacking functionality keeps all components snugly secured to the Arduino. This protoshield works with the UNO, but there is a larger edition called the Mega Protoshield. It has even more prototyping space – though it’s only compatible with the Arduino Mega.